How can biochar production have...

Black is the new Green 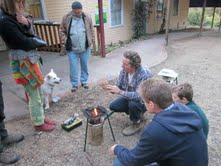 About CRAFT’s Format and...