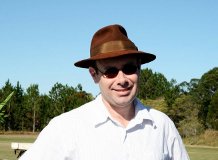 Peter Murphy is a modest man, with much to be modest about. He started his working career as a software developer, using the power of C and C++ to bind computers to his will. However, after eight years of it, he decided to follow a woman he was seeing to Việt Nam. To pass the time, he took up ESL teaching. The relationship ended but the profession remained, because there was a great deal of demand for learning the English language over there. He met another woman while in the country, got married (as you do), and returned to Australia with her. He started a Dip Ed., then stopped, and did system analysis for some time.

Peter’s dream job is to teach IT. If that’s not available, he likes to put websites together. As far as he sees it, there’s more potential viewers that desktop applications, you don’t need to worry about what operating systems they’re running, and informing people is just as simple as sending them an URL. He prefers the Django web framework, but is not adverse to wrangling and wrestling with WordPress.

When not coding, Peter likes reading, listening to music (preferably live) and playing the bass guitar. He also likes writing, when he has the time. However, he hates writing about himself in the third person. Peter lives with his wife, An, in West End, but has no children. He does have one dog, Timpani, but due to Australia’s quarantine restrictions, she remains in Sài Gòn with his father in law.

Peter Murphy can be contacted on peterkmurphy@gmail.com. He has his own website: http://www.pkmurphy.com.au/.

Note: Peter Murphy would like to acknowledge Dolph Cooke’s role in setting up and initialising CRAFT’s installation of WordPress.